When you do things for yourself, do you have to be destructive towards the world? Life can be made fairly good both for you and for the rest of us.

Maybe you'll not only help out, but even give everybody a good laugh from time to time.

I’ve been familiar with many of the paintings of Johan Christian Dahl and Hans Gude all my life. Almost every Norwegian knows them. The Bridal Procession in Hardanger, the painting of a Haugeaner meeting, the idealised portrayals of people from the countryside. The pictures of landscapes of Western Norway, majestic mountains, yes, of course they are. The paintings have shaped our concept of these landscapes, of nature altogether. Our national pride.

My own attitude to these things is strange, I really have split feelings to the whole thing, being as national as any 17th of May celebrant in one moment, and mocking the whole thing the next. Something is not finished in my head. Maybe it’s ok to have it like that, I don’t know.

The current exhibition in the National Gallery contains a lot of paintings by these two national icons, but the whole thing is centred around the sea, which is new. I knew there had to be other things besides the clichés we grew up with. I know that this is the case in music too. There are other composers than Grieg, Svendsen and Halvorsen from the same period who also did brilliant things, but no one seems to know anyone else than
these three. You can regularly meet the claim that we don’t have artists
other than a few, which is simply not true.

You needn’t go farther than the Oslo municipal library, the Deichman, to find these compositions. I did a small venture some years ago with a friend, a violinist, and we found some beautiful things. Some of this has been recorded, some even very well played, but a lot isn’t, and generally our own classical composers are largely unknown, to the world and ourselves.

There has been a small revival the last years, but still there is a lot left to discover.

For me, personally, many of these paintings of coastal landscapes are also extremely familiar to me in real life, many are places I played as a kid. I grew up in Asker, half an hour from Oslo along the coast, on the western side of the fjord. We also used to visit my grandparents, who lived at Tjøme, an island near Tønsberg. It gives me great pleasure just seeing these places painted like this, which to me add the experience of life along the coast, to the national cliché “We are all farmers”.

Well, and fishermen, and in my family’s case, sailors and pilots.

The mountains were also part of my world, but actually only in short vacations. These parts of the country played a big role in the formation of the concept of Norway as a country, a concept that is still there to a certain extent.

As “everybody else” we spent some time somewhere up there, every winter as I recall it, and many summers. For us it typically meant a week of walking in Hardangervidda or Jotunheimen and sleeping at the different lodges of Turistforeningen, the Norwegian Trekking Association, who run a lot of such places, with accomodation and food. Its work still plays a significant part both in Norwegian culture in general, through the culture of walking, hiking, and they also participate in discussions about
environmental issues.

Even if I roamed the woods where I grew up too, it was all close to the sea. I can remember for instance once when skating at the Oslofjord, the ice moved underneath me like a wave as I crossed a long, frozen crack in the ice and went farther out than anyone else, to a part with newer, thinner ice. I got myself back on the inside eventually, but strangely, I was not afraid. We were pretty daring back then, wherever we went. Today a mother or a grandmother would probably have stopped me.

Colourwise the paintings on the National Gallery give us, of course, many blue colours of the sea, adding to the green and sometimes yellowed tint of the mountains that stay in my mind as the accepted picture of ourselves, of Norway, as it were.

The exhibition quite simply manages to fresh up and expand for me concepts that definitely need it.

The link to the exhibition has expired, so I add links to some pictures instead, from other sources. 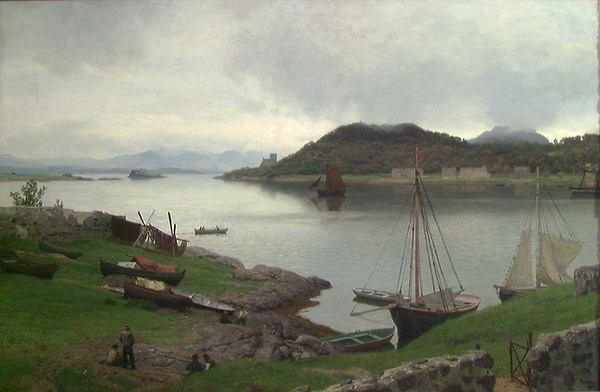 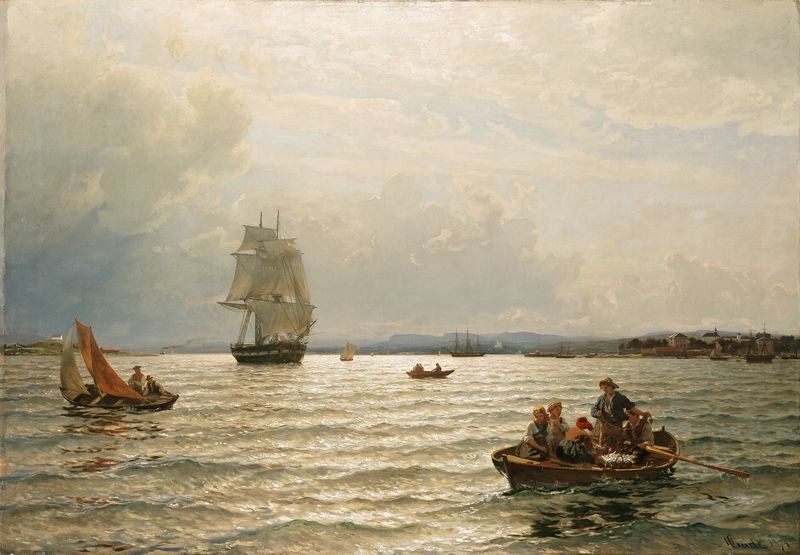 Link to my music:
http://www.gothesen.no/Eriks_verden/Noter%26notater.html

Writing a blog and hoping someone will pay for reading it is a little like playing or singing on the street.

I would really love it if you could spare a dime or two. Button in the top right corner.